One of my top strengths in Strength Finders is ideation. Sitting around a table brainstorming is both stimulating and engaging. But lately I have been thinking about what happens when we are willing to share ideas? What I have found is that when we freely share ideas, we create space for innovation and more room for creativity.

Here is an example:

Her Christmas Eve idea was for kid’s to see themselves invited into the manger scene. They could decorate a peg person and place themselves at the feet of Jesus, by the cow, or in the chorus of angels.. Kids learn through play, and we know how much they love to rearrange manger scenes. It was a win-win interactive scene.

IDEA #2: I borrowed her idea with permission the following Christmas. But instead of placing the manger scene in the narthex, I made it the main focus of my Christmas Eve Family Service.

As people entered the sanctuary, there were tables set up for each person to decorate a peg person. We spray painted the peg people to represent different skin colors. Using a sharpie, people created a face on their peg person, added a scarf, and their initials to the bottom. The message was about placing yourself at the manger, with all the sounds, smells, and sights, and at the end people processed up to place themselves there as we sang, “He Came Down that We May Have Love.”

IDEA #3 – A couple of months ago, I was sharing creative storytelling ideas at a workshop at Luther Seminary. One of the participants was Pastor Adam Blons from Macalester Plymouth United Church in St Paul, MN  He took the idea on step further: 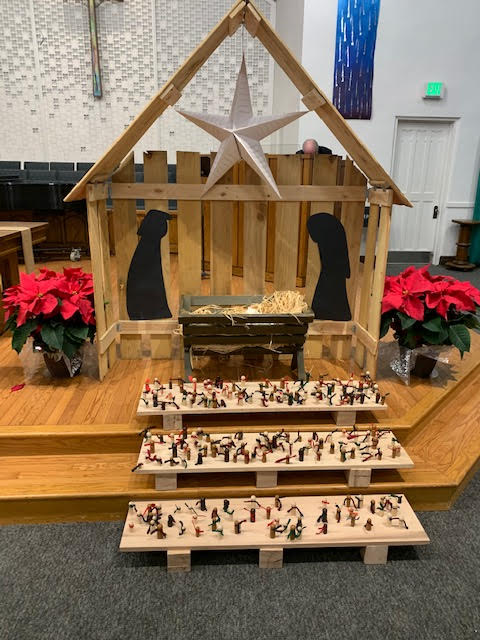 He said, “Each person received a peg person, decorated it, and wrote their names on it. At different points in the story, we gave four invitations for people to come forward and place themselves among the manger scene. The invitations included easy tie-ins for people like if you have experienced waiting like Mary and Joseph for a baby, if you have been afraid or know someone who was afraid like the shepherds, if you have been surprised by joy like the angels, and if you feel the need for more hope in our world after Jesus is born. We did this with around 300 people in attendance!”

As God’s people, we are called to be idea-sharers. So don’t be shy in sharing your ideas! It takes the body of Christ to share God’s Good News, and from the people I have met and know, the body of Christ is full of good ideas.  If you have a good idea, share it in the comments below!